LG Velvet specs leaks before the May 7 launch

LG Velvet smartphone has a very unique design among all the LG phones. Ahead of the launch, LG Velvet specs has been spotted on the internet. The new specs leaks confirms the previously known snapdragon 765G. The LG Velvet phone will replace the LG G-series in the upper mid range.

It is official that the device will come in Aurora White, Aurora Green, Aurora Gray and Illusion sunset color options. According the leaks, the Velvet phone features 48MP primary camera with OIS, 8MP ultra wide camera and a 5MP depth sensor. The front side has waterdrop notch with a 16MP selfie camera.

The device will have 8GB RAM and 128GB internal storage which is further expandable through microSD. LG Velvet has built-in stereo speakers, IP68 for water and dust resistant. Velvet houses 4300mAh battery and supports fast charging with wired and wireless charger. 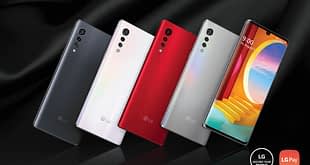 LG Velvet reportedly available for pre-order in India at a starting price of Rs 36,990