A new Vivo smartphone carrying model number V2130A appears on TENAA certification with full specifications. As of now, the marketing name of the phone is unknown. Last month, it was spotted on Google Play Console and Geekbench with key specifications.

Vivo V2130A boots Android 11 out of the box. It boasts a triple camera setup on the back which consists of 64MP + 8MP + 2MP sensors. On the front, it may feature a 32MP selfie shooter. TENAA listing reveals that the phone supports fast charging and has an under-display fingerprint sensor. It is backed by a 3,970mAh rated capacity battery, likely to be marketed as 4,000mAh. The device may be offered in Mirror Black, Cyan, and Light colour options. Connectivity features include – 5G, 4G LTE, Bluetooth, GPS, and Wi-Fi.

TENAA listing is yet to be updated with images. However, the front render was revealed by Google Play Console listing which shows a centered punch-hole display with slim bezels. The phone appears curved on the sides. It has a power button and volume rockers on the right side. 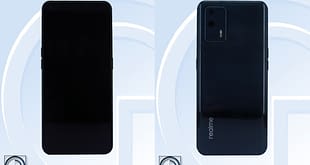